Dragons.  Beast of fantasy and fire.  They have been central to popular fiction in novels, film and more recently, television (OMG...Game of Thrones!!!) and lets not forget mythology!  I have been fascinated by dragons since I read The Hobbit as a child.  Smaug, in all his sinister glory, is fantastic character.  And who could forget Dragolin?  Our fascination doesn't stop there...now we have everything from How to Train a Dragon, Eragon all the way to the upcoming Pete the Magic Dragon.  I was even given an AWESOME dragon bottle holder for Christmas! 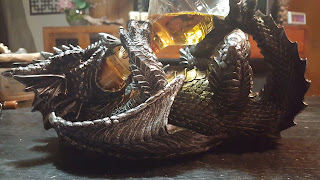 For the month of December Art Elements blog challenged its members and readers to create a piece inspired by dragons.


Initially I had intended to use one of my 2 phenomenal dragon beads by Mary Lockwood, however, that is going to take me some serious time to create the perfect beady environment for them.  So, I opted to use one of my reptile-esque cabs by Jo Hoffacker.  I did not get before pics, of course, but I have a couple other cabs of hers so I have posted a picture of them below.

I recently purchased a really nice maroon blazer and have been thinking I needed a lapel pin so, I decided to make this cab into one.  This is the first time I have made one of my embroidery pieces into a pin but I figured it would be a perfect project during the holiday season.  This means I can sport my artwork, be quirky and freak people out during my “day-job”…all things I enjoy the thought of.  Even my macabre mother shuttered at the thought of an eyeball lapel pin.  *giggle*

The first thing was to bezel the cab.  I opted for a double bezel – an inner white bezel and an outer green bezel.  I actually haven't done this before either.  One thing to note - for whatever reason I could not tighten the thread enough at the rim on the outer bezel.  I am not sure if this is because I ended with a jagged edge or not.  More experimenting is needed here.
I played around with the idea of using jewel beetle wings for the scales, however, to get the look I would have wanted with those I would have ended up with one honkin’ big pin.  Big, in my book, is never an issue...UNLESS your lapel just won't hold it all up!  I opted to go with some long magnatamas instead.

While attaching the backing I nearly screwed completely up – I forgot to cut the holes and attach the pin!  Thankfully, I remembered in time to rescue it and get the pin back on appropriately.  Panic averted!  Unfortunately, I did end up getting a little bit of the glue onto the outside of the ultrasuede but I am hoping I will be able to get that off once it dries a bit.  I went ahead and finished the edges and tada!  I may end up adding something more to the scale aspect of the piece but for now it will rest on my lapel.  I may be a mother of nothing really...but I have a cool dragon eye!  #whatwhat! 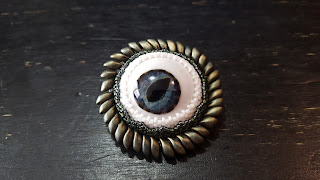