Music to My Eyes Blog Hop 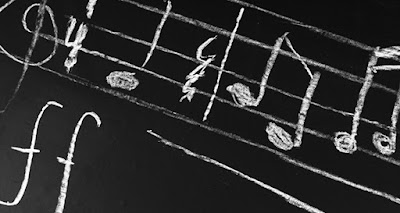 I am a huge fan of blog hops - I love how differently each artist takes the theme and creates something of their own.  They also challenge me to finish a piece (usually) within a limited time period which means I can't dwell in indecision for long.  So, for the first time in all of history, I hosted my first ever Blog Hop!  The theme: create something inspired by your favorite song (or at least one you like a lot).  I wanted to leave the hop open to all who create - from painting & drawing to beads & baubles.  We all have something in common and I wanted to bring that out by inviting all artisans.  I am SO excited to share with you what I created along with all the beautifully talented artists that joined me!  Please be sure to read all, as I am also posting the talented Vicky Sophon's work.


It didn't take me long to think of which musicians I could use...I was torn between two options:

Queen - Another one bites the dust 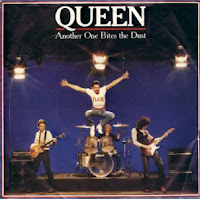 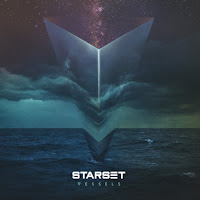 Thing is...if I went with Queen, I would DEFINATELY be using a fossil (teehee - Another One Bites the Dust...get it?) but Starset is my favorite band as of late and there is this one line in Ricochet that I wanted to replicate: "We were one and the same, running like moths to a flame..."  It was decided...I would go for the harder option and create a MOTH...because MOTHS!  As a side note, all I could think about as I stitched this little fuzzy wonder of the night was Mon Mothma. For all you non-Star Wars geeks out there...here she is in all her glory: 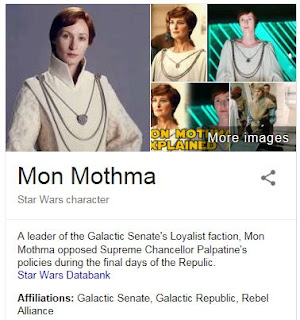 I started looking at moth pictures and drawings and picked this little guy as my model.  I really loved his fuzziness and thought that the brown and white coloration would provide some good contrast to the warm colors of a flame. 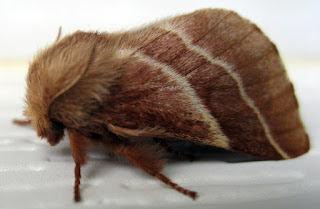 Then I started to do strange things (shocker).  I don't know if this happens to any of you, but I was so excited about this little guy, I forgot all my best practices for beading.  I cut out wings from Lacy's Stiff Stuff before I had even started beading.  This isn't really a WRONG tactic...just not best practice in my book - I am not even sure why I did it.  Anyway, I cut out the wing shapes and grabbed a small snippet of brown bunny fur I had picked up from Mood Fabrics in NYC (it was in the scrap bin and I couldn't help myself) and started beading.
For the second time in the last couple months I found myself beading...with 15s.  UGH!  I figured the only way to get the level of detail I wanted would be to use smaller beads.  I wanted to mimic the picture of the real moth's wing pattern as closely as possible so I chose 4 colors, brown, matte brown, matte cream & a bronze.  I knew the brown and bronze appear very subtly different, similar to the picture of the real moth's vein structure in the wing.  Its harder to tell the difference in the pics. 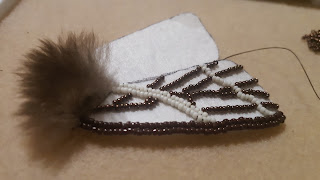 I began by beading the veins and the lighter coloration areas and then began to fill in with the matte brown color.  Once I completed this I realized that I didn't really account for the head of the moth so I snipped a tiny piece of fur and then trimmed the fuzz down just enough that I could make a distinction between the head and the...collar (?) of the bug, glued it to Lacy's, and added eyes.  I then attached the head with a few stitches hidden in the fur and began the process of backing and edging. 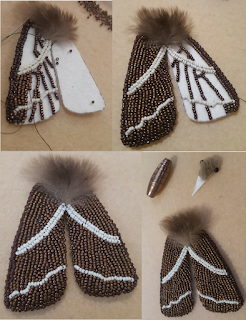 This is how the little guy turned out.  In all the beading I somehow missed I also needed a body - for some reason I didn't really account for this in my plans so I went digging around in my stash and found the PERFECT bead.  Every time this happens I am surprised...how is it that I only had one of this bead and it turned out perfect for this project? Who knows!
The next thing I had to create was the flame.  I had an idea for this in my head before I started...I was going to use soutache to create a flame.  *facepalm*  So...a few things to note:  1) I have only used soutache twice EVER 2) I was doing something I had never even seen done before 3) This wouldn't be a piece of mine if I didn't somehow get myself in a pickle.

I will be honest here...I really don't want to show you the awfulness that happened as a result of my ill planning.  Its sad.  It reminds me of a poor attempt at drawing flames as a 3 year old.  *sigh*  But...for the sake of being honest about how sometimes arting is an adventure that goes down the wrong path and then a bear chases you down that path and you run but get lost and then somehow you find yourself naked in the woods with no food...here is the pic of my horrid attempt at soutache flames...
So anyway...that was an epic failure.  After that debacle I kinda dropped the project for a week - I was irritated and unsure how to move forward.  I have a bad habit of getting stuck when things don't work out as planned.  I finally decided I just needed to go back to what I know.  So I picked up some Lacy's and drew out a shape. 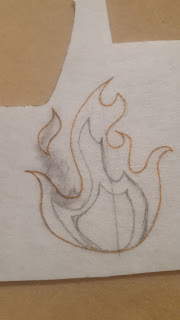 SO much better!  This time I was not ABOUT to use size 15 beads - not only did I not have time, it was completely unnecessary....thank heavens! 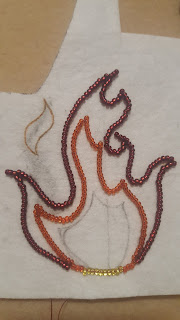 I didn't take many pics of the process...but here is the end result of the flame beading: 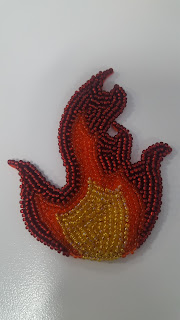 What you don't see here is that cutting out a shape like this is...uh...so delightful *glowers*.  And then I had to do it again with the backing material...yay!  Here is the pic I took before the worst part.  I think I felt like I needed to document the fact that this was my favoritest thing ever...*drips with sarcasm* 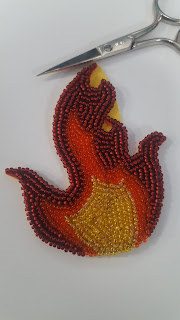 I am realizing that while I didn't really bite off more than I could chew...I really didn't plan well.  The end result isn't my favorite thing...but it did what it was supposed to do.  I have a few things I need to correct - like the crazy strap wire (the stuff I used was WAY too thin and it ended up curling a bunch).  It also needs a bit more weight in the middle. 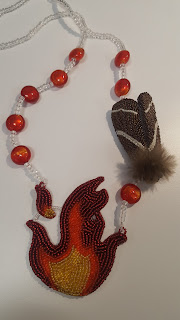 I wouldn't' say this was a success...but I don't think it was a complete failure either.  This really is just the nature of art - sometimes you have a direction...and sometimes you don't.  The bright part is that no matter where that journey leads you (yes...even naked in the woods without food LOL), you always learn something in the process.

Now I'm off to see if I can get some concert tickets so that I can show off my music inspired necklace (maybe I will get to meet the band?!)

Don't forget to check out what the other artists in this hop created!

I have to admit that when I decided to join this blog hop, I was primarily trying not to be "booted" from the group. I hadn't really done much beading in months and my musical taste runs somewhat towards the eclectic. I figured the challenge would be good for me.

Classical music has always had a special place in my heart. The nuns exposed us to it beginning in the first grade. In fact, my first concert was by the local symphony orchestra. Later, in college, I worked in a local gift/stained glass shop called, "Classical Glass." Classical music played all day.

The first time I remember hearing Gymnopedie No. 1 by Erik SATIE was on a holiday tape I had picked up at Victoria's Secret.  It felt so familiar. It's lyrical and sweet -- romantic, yet innocent.

In my research into Satie's piece, a certain image kept popping up - dancing naked youth. Eureka! I had my focal point.

For years, my go-to technique has been bead embroidery. I find it affords me a degree of freedom to draw in a variety of colors, texture, sizes and materials. I hope you enjoy it. 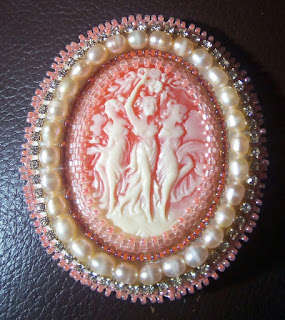 Artisans:
Kelly Rodgers - You are here!