Not so long ago in a Galaxy far, far away...

...I won a spot to participate in the August Art Elements blog hop!  Caroline Dewison, ceramic artist extraordinaire created awesome little iridescent blue & gold "galaxy beads" and shipped them over the big pond for me!  (Thank you!)

Even before I received the beads my creative cogs began turning.  First, I thought about using a donut focal for a simple necklace...but simple isn't really my M.O.  My next thought was to create a "Space Siren"...a come-hither beauty calling all astronauts into meteor belts only to crash their spaceships...or some such. As per usual I pulled a whole load of things that were good options and then obsessively checked my mailbox on the daily.
﻿﻿﻿﻿﻿﻿
Once the beads arrived I realized the face cab I originally pulled was definitely not the right style...so I began searching again. Eventually I came across a polymer clay face Lindsay Starr gave me AGES ago...and it was PERFECT.  Now I will be honest here...It is not easy to change direction on a dime when you have this great idea you sold yourself on.  However, sometimes you have to let go and let the muse take you where it travels...even if in the midst of that journey you are lead off the main path.  That is pretty much what I did with this piece...I let go. 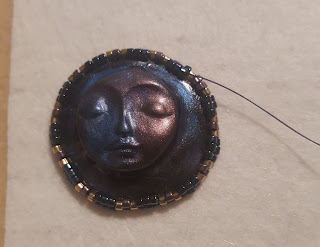 I immediately knew I wanted a stripy bezel but when I pulled gold Delica beads for this project I noticed that the gold used in Caroline's beads were a more realistic gold tone that your typical "gold color" beads.  So back into my stash o' awesomeness I went and pulled out a tube of Delicas I have had for pretty much as long as I can remember.  They are gold...REAL gold...24K gold to be exact and at the time I bought the wee tube (seriously wee tube), it was $8.00....I don't EVEN want to know how much they would be now.

I threw in some Eggplant and Navy Iris Delicas to match the little moon-girl's face and quickly had her ready to go! 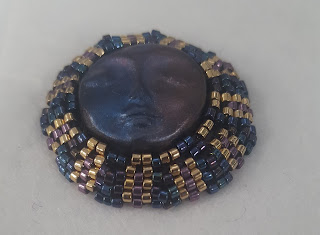 I had also pulled some sweet little star cabs by Sue Kennedy that I just HAD to incorporate.  I didn't even intend to do it but 3 Art Elements blog contributors' work is incorporated in this piece!  After gluing and re-gluing said stars (insert incorrect glue mishap here﻿) I traced around their shape with more of the stupidly expensive gold Delicas. 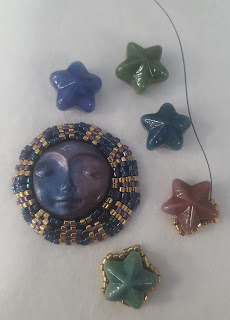 I took great amusement in the next series of pictures...they may not be great pictures but they definitely tell the story as I beaded...and beaded...and beaded...and beaded some more with Navy Iris size 15s.  (What was I thinking?!)  At one point I had these pics cropped and lined up in a row on my computer and could click thru them really fast and see the design grow! (It's all about the simple pleasures!)  I probably stabbed myself more times in the beading of this piece than I have in all my beading years...apparently working on this scale with 15s is a bit more hazardous than the norm! 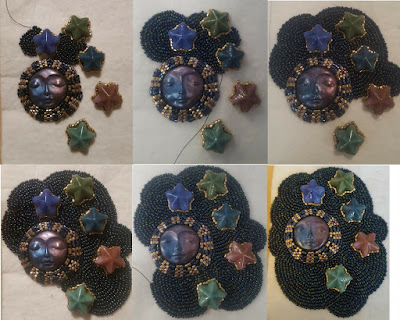 The next step was to 'help' the empty space of the piece...I fretted over this some but finally decided to try rays of the gold beads and ended up with this: 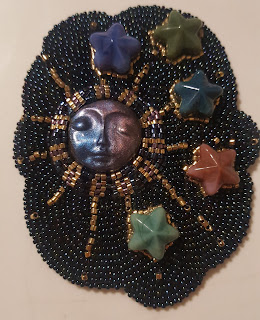 When it came to backing this piece, I wanted to give it a little extra support since it is a bit floppy so I decided to put a piece of cardboard in-between the beadwork and the Ultra Suede.  I have to admit there is a part of me that finds the back of a beadwork piece beautiful (particularly on this one) - all that stitching...there is something more personal about that side...it might be hidden to have a more finished look but there is beauty there...even on the "ugly" side. 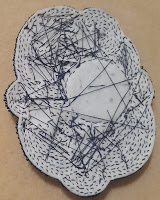 When I glued down the moon-face cab, it was to the left of a large piece of Lacy's.  I thought I knew what I was going to do. Well, I ended up not giving myself a whole lot of room to work with on the left which mean that the piece was more elongated than cloud shaped.  Sometimes following the muse means you also have to adjust for limitations you might not have realized you put on yourself.  I also ran into strangeness after adding the fringe - the fringe distracted from the piece itself.  All the sudden there was a strange imbalance to the piece.  I loved everything about the fringe by itself...but it took away from all the work in the embroidered portion. 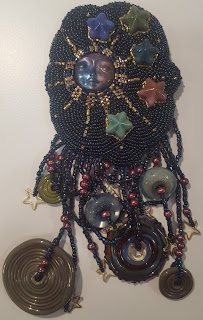 This is definitely the ugly duckling phase - though I am pretty sure that without starting entirely over on the fringe, it won't escape this phase.  All I can do is learn where I 'went wrong' and move on.

I think the biggest issue is that I added such large lampwork that it took over...I also think that the messier style of the fringe exacerbated the problem.  Had I left the messy fringe but eliminated the lampwork it would have worked far better. Now I have some hardcore decisions to make...either rip out the fringe and start over entirely (with very little time on the clock) or leave it as is.  Rip it, it is!  So...with only about 24 hours to go I removed the fringe putting me back to square 1ish.

Artists tend to surround themselves with other artists...they may not work in the same medium but they are "my people" and typically have a similar way of thinking.  I find that the more I surround myself with other artisans the more they influence my work.  In this case a good friend of mine, Kara Clouse of Iridescent Eye, was the one that prompted me to use the little gold stars.  She had some in silver for using in resin and they were PERFECT so I ran to the store and snapped up some gold stars and quickly reworked the fringe. 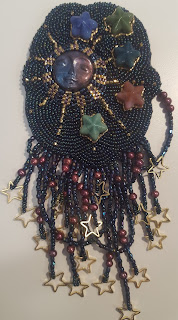 YAY!  I like this much better - I feel like the new fringe suits the piece and isn't so distracting.  Last but not least come the straps.  I felt like even though this piece was smooth in its creation - I didn't get too hung up on indecision like I have in the past, it was fraught with challenges.  I believe it turned out really well in the end, which I guess is the important thing.  I do find it rather interesting that stars have played such a role in life this month...including but not limited to seeing my first solar eclipse on the 21st. I hope you have enjoyed this journey with me - please make sure to hop to the other amazing artist's blogs to see what they created with these amazing galaxy beads!  And without further ado, here is my final completed piece: 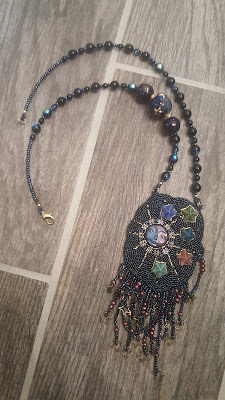 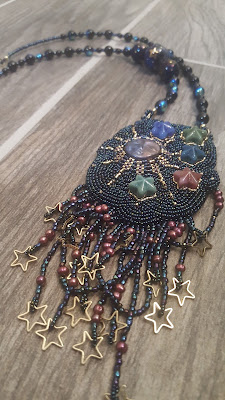 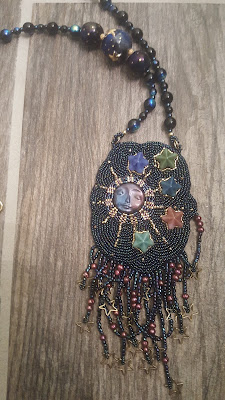