So I figured...if I was ever asked to be in a rap video I HAVE to have some bling 'cause I'm sure NOT going to twerk....

I like to break the rules.  I especially like challenging the idea that jewelry should be a certain way or made of a certain thing or that earrings, bracelets and necklaces should match.  I don't know if this is the little rebel in me or if I am a touch eccentric...but probably a little of both.  =P

A while back I went to a very small local Gem & Mineral Show and encountered a man with stone slab that did custom cut work.  *grin*  YAY!  While looking through his buckets of slab, a piece of Outback Jasper called out to me so....I decided to have him cut it for me.  I wanted a BIG cab...a really big cab...a really really big cab...like a brobdingnagian cab - I call it Goliath.  (Ha!  I crack myself up - how appropriate to call a big stone Goliath...) 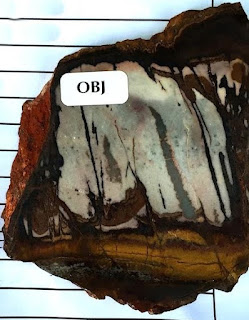 Now, you have to understand, I knew this was gonna be a large piece of rock...but I have to admit, when I received it in the mail its size took me by surprise.  This beast is 4 3/4 inches by 3 3/4 inches.  Here is a pic of the finished cab: 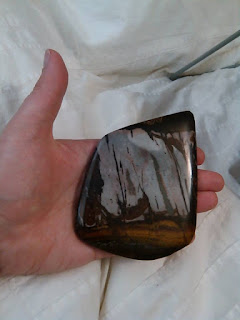 I am breaking the rules and making one hell of a big necklace with this one.  Because of it's sheer size and weight there were some unique challenges I faced...which I will share here.

First, I normally do NOT glue down my cabs to Lacy's Stiff Stuff or Ultra Suede before beading them - partly because if something happens and I am not happy with the final product I don't have to worry about trying to rip the backing off the cab.  This one is a bit different.  This cabs weighs a ton and I didn't like the idea of that kind of weight resting solely on the beads and thread of the bezel. 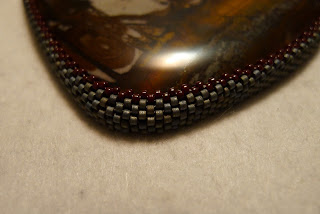 So, I glued down the monstrous cab and spent what seemed like eons building up the peyote-stitch bezel.  Now, next step was to add a line of beads around the outside of the cab.  One thing I knew not to do with this piece was to make it any bigger than it already was, but one thing I have learned - you always need to have at least 1 row of beads around the outside of a bead-bezeled cab.  The primary reason is this ensures you don't have a strange rim of Lacy's sticking out beyond the cab after you do your edging row. 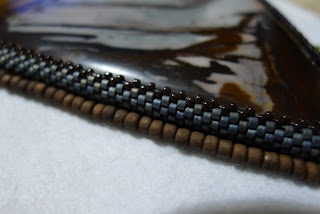 I knew before I started this crazy project EXACTLY what I wanted to achieve - and I knew HOW I wanted to achieve it (unusual!).  The goal?  Lichen...  Now, I had worked on a project back in the day as part of a challenge for Blu Mud (back when they made ceramic components).  It involved creating a whole lot of seed beaded circles.  I remembered that they only laid flat when I worked hard not to have a tight tension - so I knew if I increased my tension I would be able to make little cups.  Here is the result: 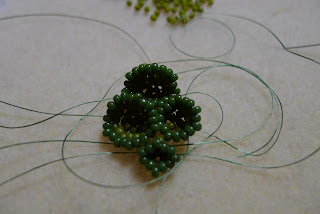 So I attached the lichen and ran into a bit of a challenge...how was I going to attach the straps?!  I mean, being that this thing weighs a ton, thread would NOT be an option...and I was even concerned about using SoftFlex since the attachment point would still be small and involve thread.  I came up with a cool idea.

I have been making copper jewelry for some years now under the name Magnolia House.  Most of our (it's a mother/daughter business) pieces sell either person to person or in one of the 2 local stores that carries our work.  This being said it popped into my head that I had a soldered wire triangle sitting on my worktable with no where to go.  This would work perfect! 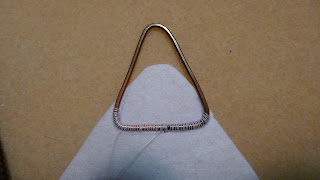 The reason I did this was so that I had a very secure place for the straps to come off the piece of work that would not compromise the beadwork of the piece...AND...was weighty enough that it would easily hold up.  Then I glued (GENEROUSLY glued) the 2 backings together sandwiching the stitched copper piece between the Lacy's.  THEN I backed the piece and beaded the edges to finish. 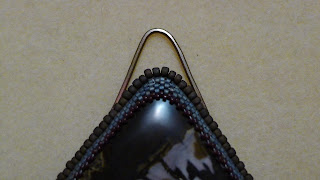 The end result of this piece was EXACTLY what I wanted.  I have not yet been asked to be in a rap video...but if I am, I am DEFINITELY prepared! 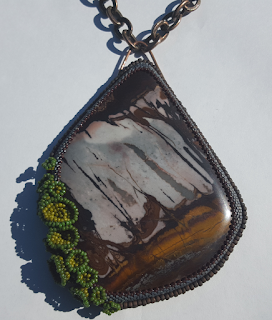 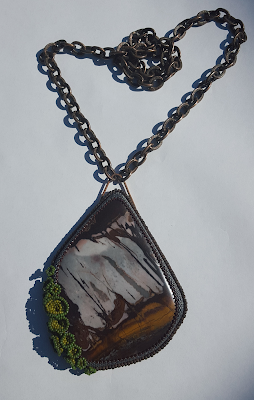 And here is the thug-worthy final product! 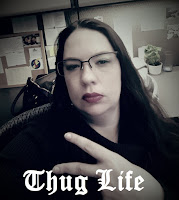 There were quite a few challenges in creating this piece both due to size and weight...but with a little out-of-the-box thinking I am now rap video ready!  *smirk*