The Art Elements Bloggers have really got it goin' on (if you didn't already know) - I consistently find it hard to pass up the opportunity to work with such a wonderful cast of artisans and once again I have been given that opportunity!  February's Component of the Month is hosted by the incredible Niky Sayers!  Niky made these super cool runes from copper metal clay - the moment I saw them I was chomping at the bit to have one.

Confession: I know NOTHING about runes except that I immediately think of Lord of the Rings - because LOTR is like my favorite thing.  As soon as I knew I was picked, ideas of hobbit holes, secret doors and trees began to swim in front of me.  I briefly looked up what some of them meant and then waited for 'Brown Santa' (USPS) to arrive. 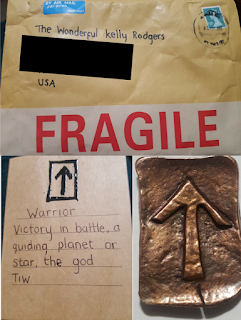 It arrived!  And it is even more awesome in person...except...Warrior.  Hmmm.  So I hadn't considered that all my LOTR thoughts wouldn't necessarily suite this piece.  Now what?  After some consideration, I realized getting "Warrior" was more apropos than any other rune, as my first name has a similar meaning.  I have always believed that there is something to names.  I have an aggressive, bold, I-don't-put-up-with-crap personality which matches my name therefore this rune is like a symbol for who I am.  Inspiration for my piece didn't have to come from ancient Viking beliefs or a favorite fantasy - it can come from the simplest of things - my name.

I began to think about what kind of warrior I would want to be known for and 2 things came to mind - advocate & defensive.  More in my past than recently, I have lobbied for more strict and defined laws against human trafficking, educated the public on the issue, written senators and even lobbied at the White House.  I want to be a warrior who advocates for the freedom of others.  I also have a tendency to "mother".  I may not BE a mother but, whether my friends and family like it or not, I often find myself mothering them or giving counsel.  I want to be a warrior who takes up arms in defense of others - not one that seeks battle.

These thoughts led me to a relatively obvious inspiration - armor.  Armor is fascinating both in structure, history and workmanship.  (Random aside: check out my AWESOME finger armor ring!)

With this as inspiration, I began working on the details of the centerpiece for a necklace that may only be suited (pun!) for wear at a Ren Faire but has a deeper meaning.  I began sketching out a shape... 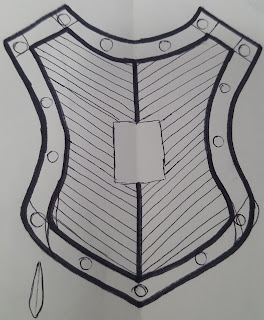 You know how sometimes things come together super easily?  Well this was one of those moments.  A beader friend of mine, Madleen Demaras, had given me a number of vintage nailheads just the day before - in that mix were some metal embellishments with a coppery tone that were PERFECT for rivet heads. 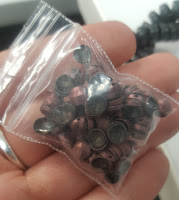 I traced out my sketched shape on a piece of Lacy's and got to work arranging and securing these little beauties. 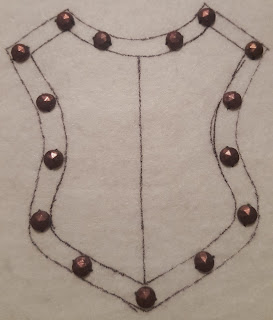 The next step was to bead the border.  I decided to bead the inner and outer border with black and fill in with my favorite silver 15s.  Once again, I chose 15s.  Sometimes I don't know why I do things - I just do.  Though there is a part of me that does get satisfaction beading on such a small scale because you do have more control with fluid lines.
﻿
﻿ 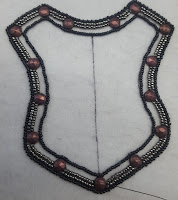 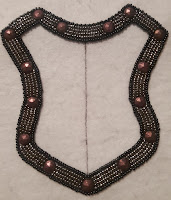 With the border complete, it was time to attach the rune and begin filling in the center!  The back of the rune actually had some unevenness so before I attached it to the center of my shield/breastplate, I used scrap pieces of Lacy's Stiff Stuff to even it out for a flat surface.  I also used a black Sharpie to darken the edges of the scrap Lacy's so that it wouldn't show in-between the beadwork  especially since I decided not to bezel it. 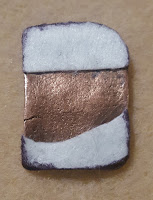 After securing the rune I looked at the beads I had chosen to use to fill in the center and realized I didn't like them for this after all.  I searched for something more appropriate and landed on a coppery bronze 11 and began the process of filling in. 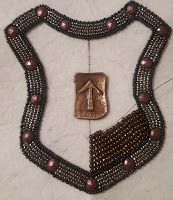 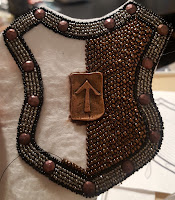 As you can see from the photos above, I worked in diagonal from a center line.  I knew I could bead each row all the way across, however, it isn't always easy keeping each row completely diagonal so I decided to work each half separately.  This allowed me to concentrate on one angle at a time catching weird bendy issues early.  Finally, after a couple days of intense beading, I finished. 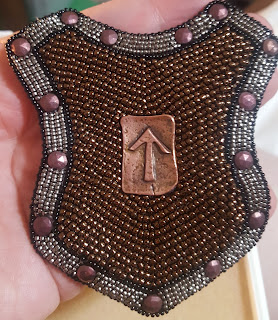 Because the Lacy's was heavy with beadwork, it was very curly and bendy so I needed to reinforce the piece with something - I chose a piece of plastic with an exceptionally chill cow on it.  Before gluing down this vacationing bovine, I took a picture of the back of the piece.  For some reason I keep doing this - I have mentioned it before but the back of beadwork is fascinating - a historical account of every artistic decision.  I think its beautiful and something worth documenting. 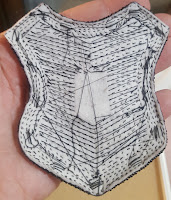 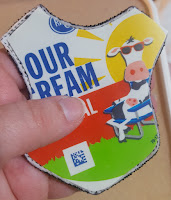 With the plastic sandwiched securely between the beadwork and Ultrasuede, I worked on the edging of the piece.  All along I had this cool idea of mimicking the articulated shoulders of armor for part of the strap.  I had a few ideas of how to accomplish this but I needed to make 4-6 pieces of separate beadwork for this.  I drew out my template, traced it to Lacey's and was about to start the process of beading all these thingies when....

Boy do I ever keep you on your toes lol!!!  About 1/2 way through completing the edging I was showing my graphic designer mother the piece and she had a BRILLIANT idea that completely shifted my thinking.  She suggested that instead of turning the piece into a necklace, it was much more suited as a kind of "patch" on a book or purse.  She held up the beadwork next to a army green canvas purse and I was IMMEDIATELY sold.  I knew it would be a strange necklace - which I don't really mind...but the piece is far more suited to a bag embellishment!  I have never done this sort of thing before so I knew it would be an adventure.  I began to disassemble part of the work I did on the backing so that I could attach the shield/breastplate to a bag. (BTW, this is the day prior to the blog post that I began this process...I also keep myself on my toes apparently.)
I removed the edging, the Ultrasuede and the plastic I used to support the piece.  Thankfully this was a very easy process just carefully peeling off the layers.
With the beadwork detached from the backing pieces, I took a Sharpie and blackened all the edges of the Lacy's.  The edge doesn't really show, however, since there would be no bead edging on the canvas bag, I didn't want to take a chance that the white would show through.  Then I used a ruler and the seams of the purse to find the middle and tacked down the beadwork. 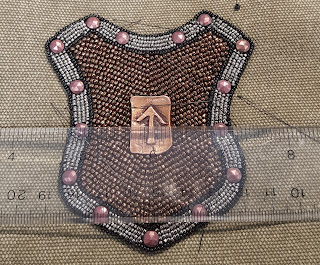 The next step was to see how many needles I could sacrifice in the attempt to sew through the thick layers while still avoiding stitching through the lining.  If I was amazing I would have pulled stitches at the inside seam of the purse so that I could easily stitch the piece down before reattaching the lining...however, I hate fabric sewing AND am not particularly skilled at it so I decided to do the least hard way (for me) and stitch it down without ripping stitches and reattaching lining.  I also realized that the needles I used were NOT made for this, however, I am out of time and the only needles I have accessible are beading needles.  Lookie at all the fun shapes I made!

It took some doing to properly attach the patch but now I have a snazzy new custom Warrior bag!  I might get around to doing some more detail work on it someday, but until then I will carry this with pride! 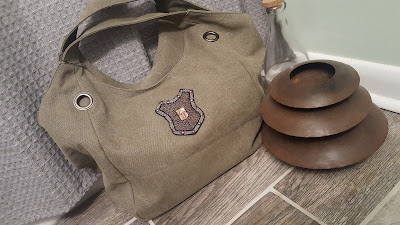 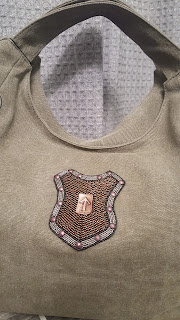 Niky Sayers
Posted by LYILHA at 4:19 AM