A Beading of the Minds

It seems beading artists, bead shops and bloggers alike are on the search for ways to engage and expand.  It's not always about growth, though, sometimes it's just a way for people to gather with other like-minds and create something without feeling like they have to invest loads of energy and time into a project.  Here, I want to show you one way a local-ish beadstore in my area is doing this!

White Fox Beads in Knoxville, TN has held a beading round robin for the past 3 years.  I have participated in the last 2 and it has been a fun and interesting way to work with items and color combos I wouldn't normally choose. I have learned a lot during these events and I wanted to share with you how this community of beaders comes together to create in this unique way.

The concept is relatively simple.  On a set date participants bring in a UFO (Unfinished project) - it could be a component or a bead swatch - just some piece of work that wasn't finished.  Each item is put in a bag with your name on it as the original creator.  Every week the items go to a different beader who would add a little something to the item and passes it on.  Sometimes a beader will keep an item a couple weeks (life, ya know?).  However, on the final date you receive your contribution back, finished into a beautiful piece that several artists had a hand creating. There is a freedom in the process - because you only add a little bit of yourself into the piece and pass it on.

This year, the first piece I received I forgot to take a picture of before I started and somehow also forgot to record the original creator (oops!).  It was a piece of soutache that was glued to a large piece of red ultra suede.  I decided to go ahead and finish the backing and edging to make the next beader's contributions easier.  In the pictures below I had already cut out soutache shape and begun the edging.  This is all I contributed for this piece before passing it on to the next artist. 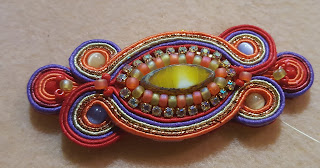 The next piece I received ended up being two different components.  Since two different artists worked on these I am not sure what is original and what isn't.  The original artist is Judy Woodson and the second was Judi Talley.

When I received these I was inspired by the teal and copper beaded square and wanted to riff off the colors from it (they were ME colors).  I also knew I wanted to create a focal so I decided to play with shibori silk ribbon and a new Czech cab from my stash.  Experimentation was in order - it had been a while since I used a fiber in my work!  Here is what I created: 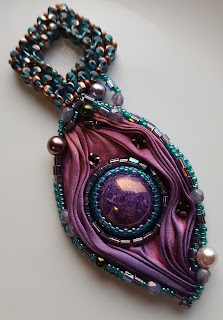 I really didn't intend for the piece to look like an eye, however, maybe I was subconsciously heading that direction because I have been a bit eye-obsessed as of late.  *shrugs*  Either way, I created this shibori piece and attached it to the square.  I left the other ring component for the next person to figure out.  Here is the back of the piece:

The next piece I received looked like a completed pendant with an extra component in the bag.  The original creator was Judy Tally.  Other contributors to this piece were Judy Woodson, Stephanie Pettiford, Phyllis Dermer, and Gail Deluca.

I really didn't want to add anything to the pendant itself so I decided to create the strap.  After what was a surprisingly brief stash raid (this normally takes me a long time...distraction usually plays a role) I found the perfect beads to create the necklace for this pendant.  I used soft flex, size 8 beads, some small glass rounds and some large square glass beads I think have been in my stash since the beginning of time.  I decided again to leave the extra component for someone else to figure out how to incorporate.  Please pardon the following picture...it was taken in haste.

The final piece I received to work on was a big challenge for me.  The color scheme was far from my comfort zone.  It took me a long time to consider what to do.  It wasn't the individual colors that threw me but rather the combination.  Unfortunately, I forgot to record the creator and the others that worked on this piece.

After much indecision I decided that the bracelet really needed to have something of more interest for the center.  I considered the option of putting some art beads in the center but decided against it...especially since I didn't have anything in particular that would go with the colors.  I finally landed on the idea of making 3 flowers to jumble into the center.  I gathered my supplies and then considered the make of the flowers themselves.  I finally landed on a particular style and gathered the center with them.

Here is a close-up of the flowers I added: 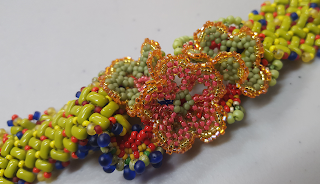 ﻿During the finale party we ate pie (it was on 3/14) and discussed our process and what each of us contributed.  We oogled the final pieces we all contributed toward and generally just had a good time, it was truly a beading of the minds.

Now you get to see the final product from my UFO!  The artists that helped pull this piece together were: Phyllis Dermer, Judy Talley, Stefanie Pettiford, Judy Woodson, Gail Deluca and of course myself.﻿﻿ 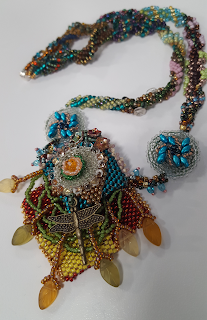 What started as a few little beaded circles ended up in this gorgeous piece!  You can see a circle used in the center of the pendant and then 2 more on either side at the straps.  Here is a close-up: 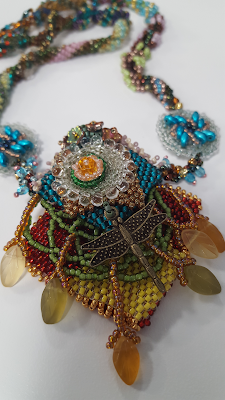 I hope this inspires you to look for new and exciting ways to expand your beaded horizons and get out of your comfort zone!  For me, this is a never-ending process that continues to grow my work.  Maybe you can even suggest for your local bead shop to start their own round robin!﻿
﻿
﻿
﻿
Posted by LYILHA at 7:27 AM