Welcome to the Beading Back in Time Blog Hop Challenge Reveal!  Well…at least I am revealing what I can.  Deadlines being what they are and life being what it is, sometimes things just don’t get done.  That is not to say that I haven’t poured into this challenge!
As I mentioned in my previous post, the theme for this round is “Pre-Human”.  I spend a lot of time working to make sure that every design component honored my beliefs.  I am so excited to share with you my process and the meaning behind each component and ultimately what the finished piece will look like.
First I wanted to create what is represented in Genesis as “before”.  Before there was something…there was nothing but God.  (For those interested:  The earth was without form and void, and darkness was over the face of the deep.  Genesis 1:2) This representation of emptiness kept presenting itself to me as a cone shape – a sort of cyclone of blackness.  In working through how I wanted to create this, Lindsay Starr (my beading buddy extraordinaire) of Phantasm Creations reminded me of the Kate McKinnon book Contemporary Geometric Beadwork in which cone shapes are explored!  Perfect!  Not only was I able to utilize this book as a resource to explore my own beadwork…but it gave me EXACTLY the look I was going for.  This is what I ended up with: 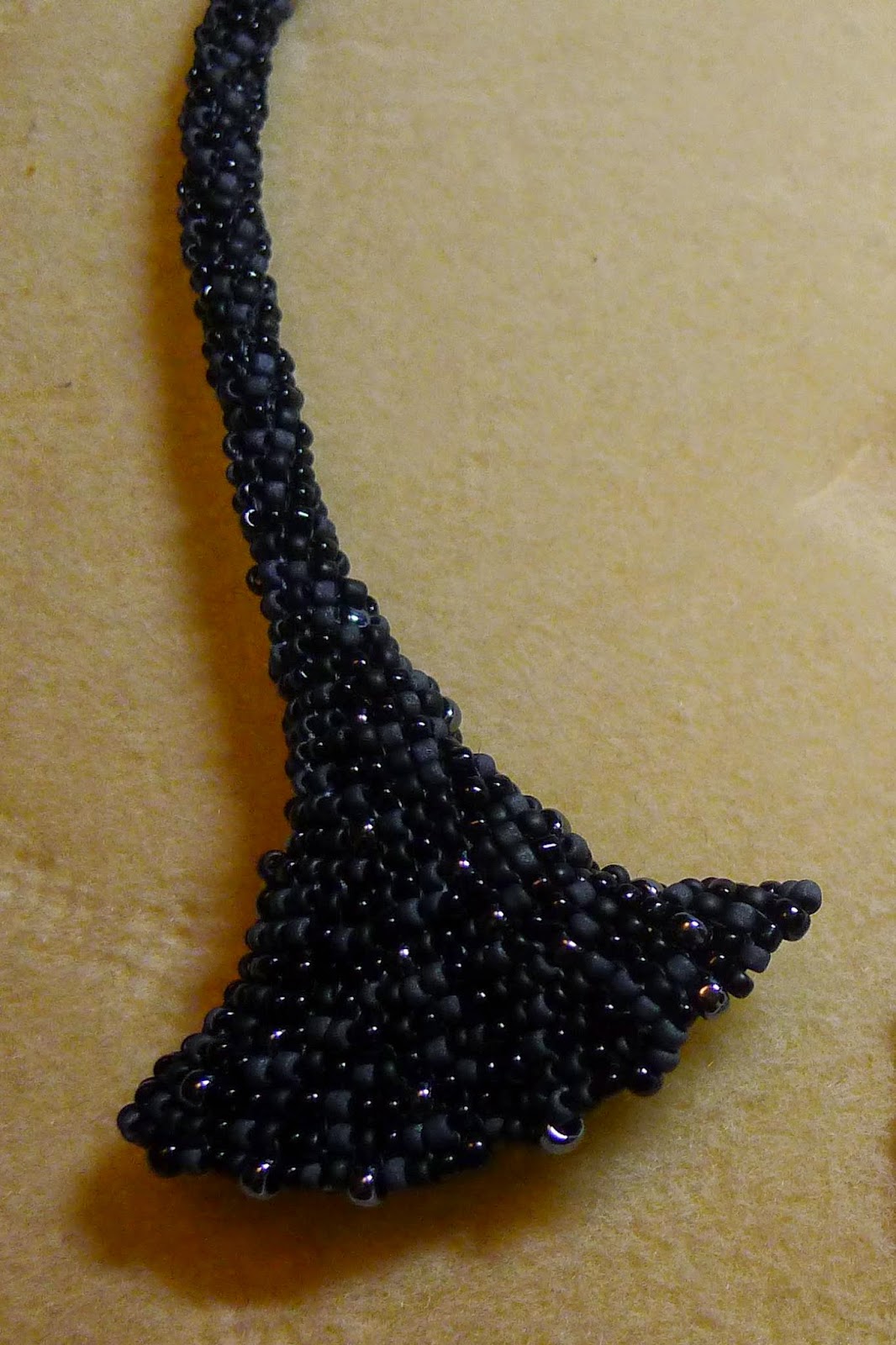 I used a bead mix I created using matte & shiny blacks and greys to give my “nothing”-cone texture.  I also wanted to somehow represent God’s existence even before creation…within the “nothing”.  Every time I type, “The nothing” I am reminded of The Neverending Story.  Atreu!!!!  But, I digress…To represent God’s presence, I created a purple spiral around the cone.  Historically the color purple has been worn by royalty and those with riches and power.  The primary reason for this is the process for making purple dye was not easy to do, lengthy and pricey.  Interestingly, before Jesus was crucified he was mocked by being made to wear a purple robe. (John 19:5)  This is how the cone turned out: 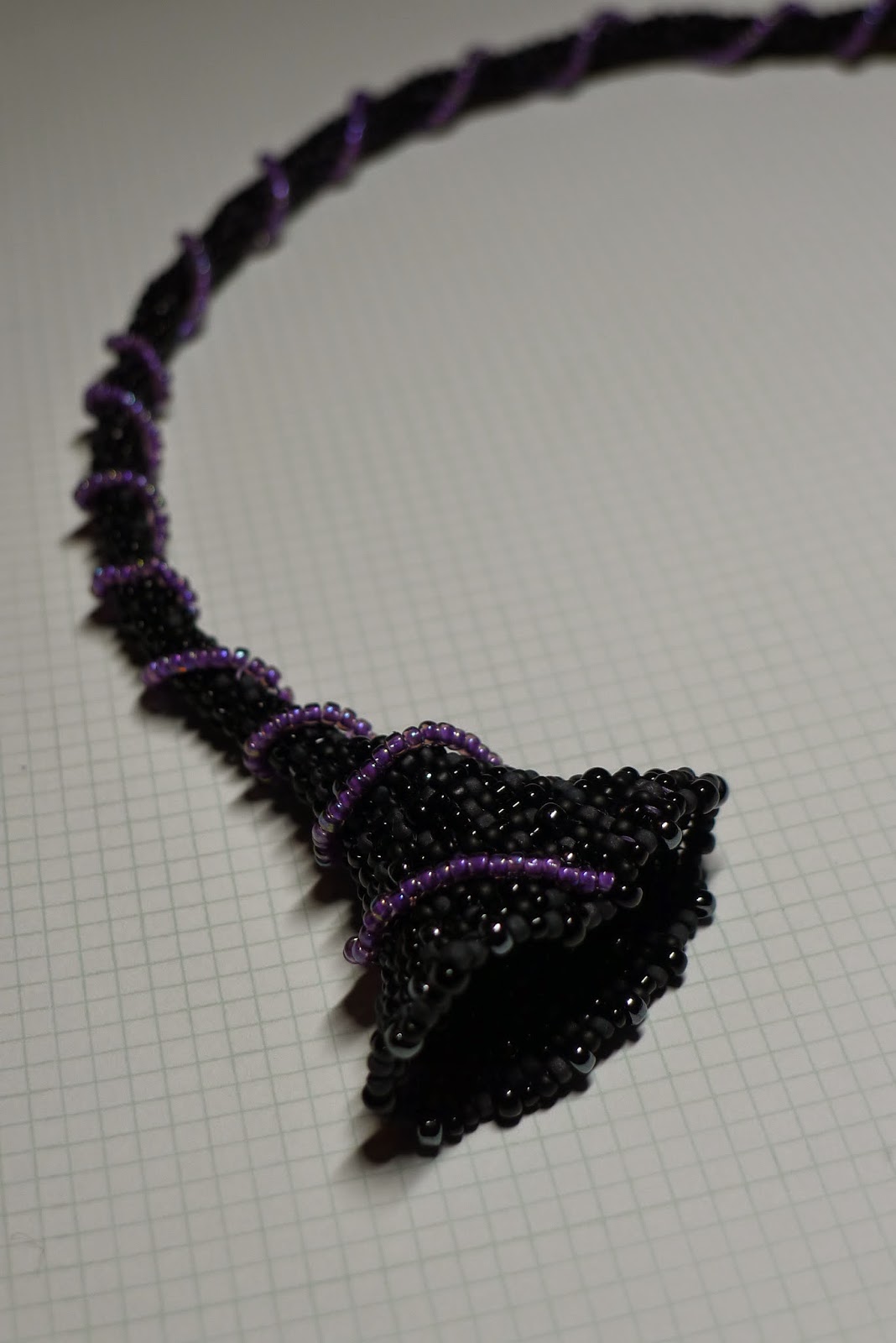 The first act of creation was the creation of light and the separation of light from dark as seen in Genesis 1:3-4, “And God said, “Let there be light,” and there was light.  And God saw that the light was good.  And God separated the light from the darkness.”  In order to represent this, pouring from the cone of “nothing” is my interpretation of light using silver lined Czech true cuts.  This was the first act of creation and completed the first day.  While I haven’t attached the “light” to the “nothing”-cone, here is a picture to represent what it will look like once done: 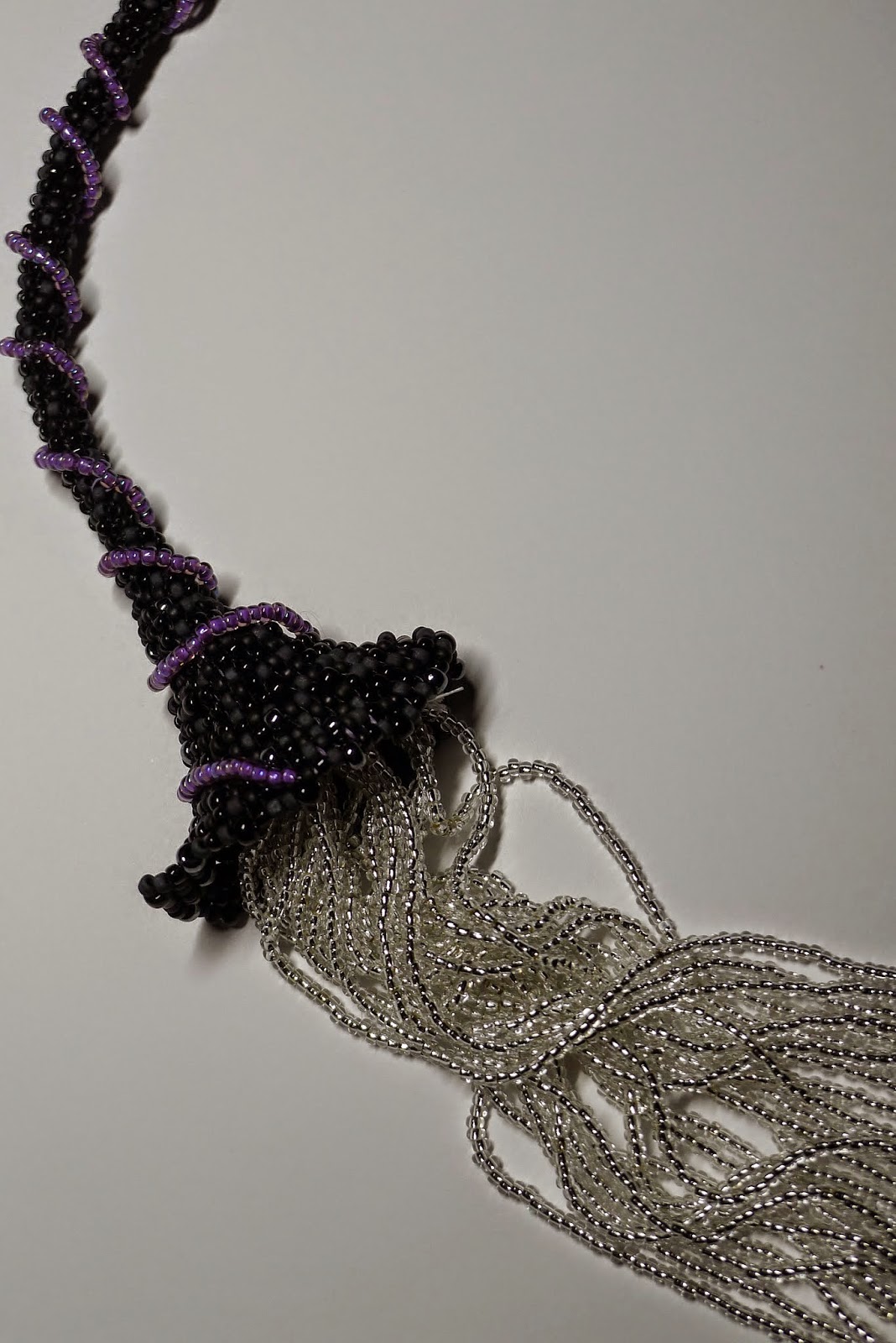 The second day of creation is harder to interpret but essentially God created the heavens and the earth but the earth was basically water.  (Genesis 1:6-8)  My first step in creating early earth was to create the waters.  So I applied a technique I had used in an earlier piece I constructed and made a circular disc with clear beads using blue thread.  I used this technique instead of just using a watery blue bead because I think this creates more depth and a much more realistic interpretation of water.  What do you think? 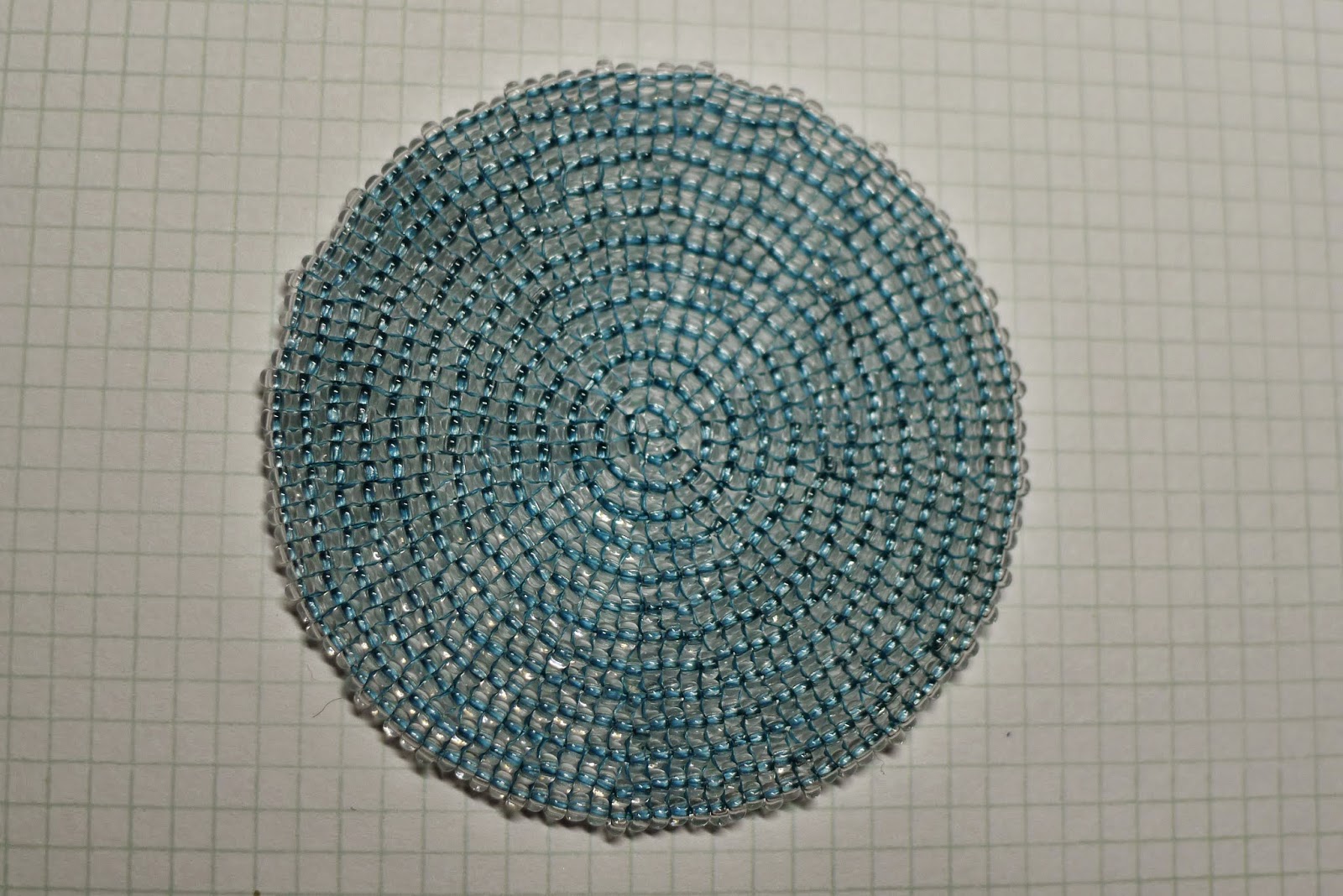 The next step in my process is to add land and plants, which were created on the 3rd day.  (Genesis 1:9-13)  This proved to be a pain to make.  My intent was to create Pangea as a separate beaded layer.  While trying to figure out how on Earth (pun intended) to do this...I decided to make a graphed out version to use as a template.  I love that beading Pangea as a separate layer allowed my creative process to follow the timeline of creation but it also gives my beaded earth dimension! 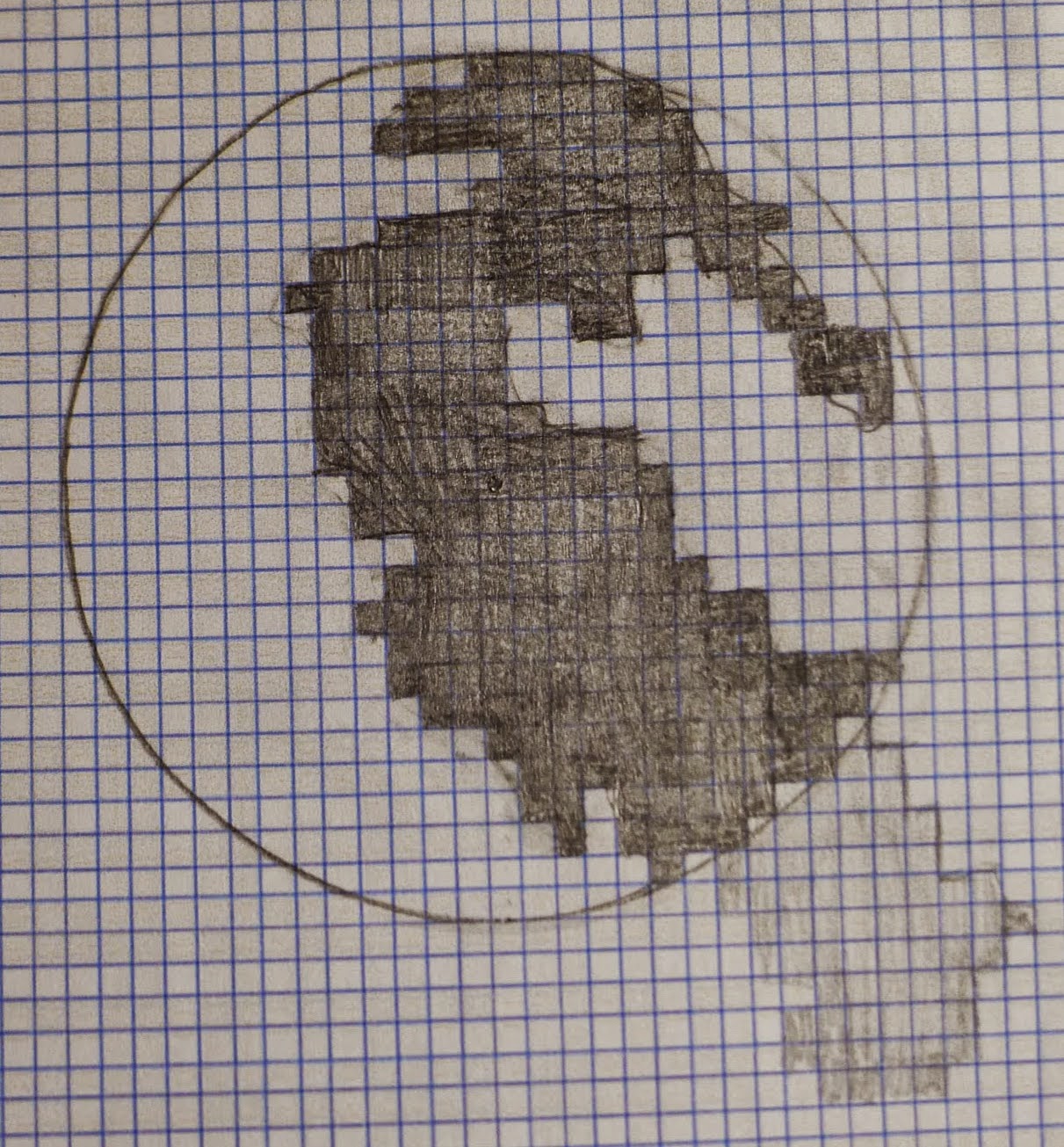 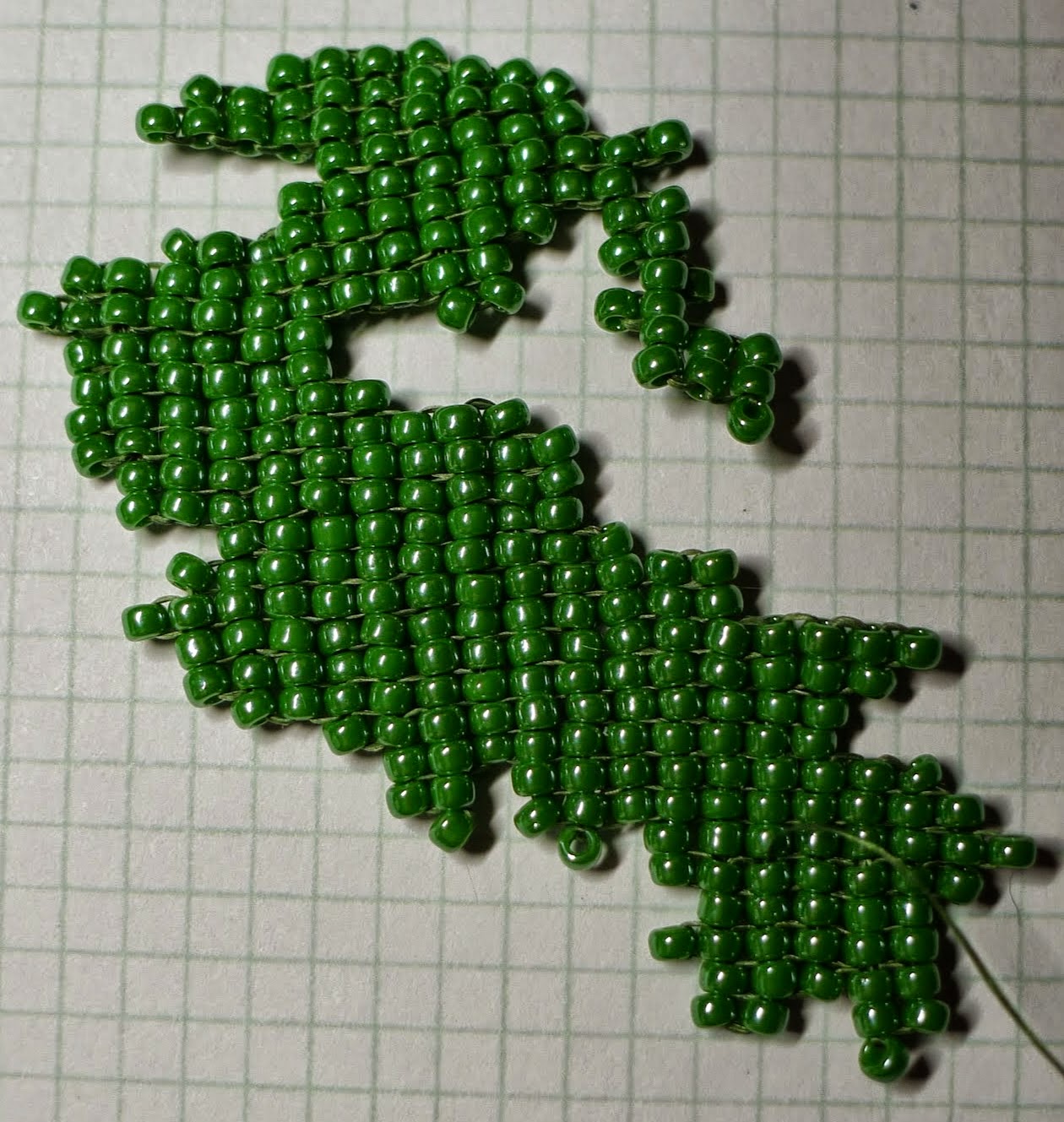 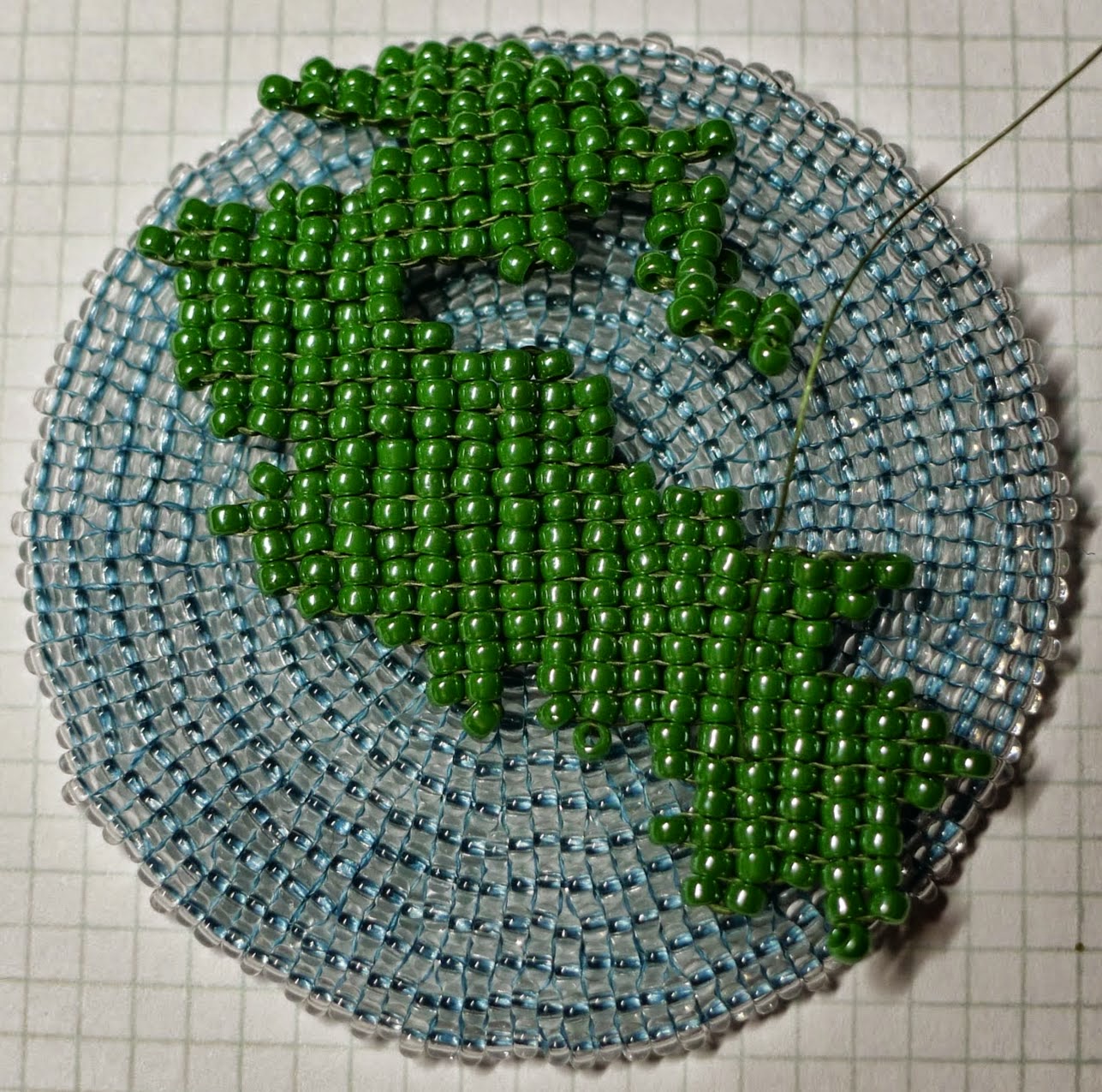 On the 4th day the Sun, moon and stars were created.  (Genesis 1:14-19) Originally I was going to skip beading this, I’m not sure why…maybe because the 5th day is so exciting.  But the more I thought about it, the more I think it would be a mistake to skip a WHOLE DAY (I mean, I am already super limited on my timeline)!  So…staying true to theme, belief and medium…I will be creating a sun & moon.  I have already started the moon (see below).  Once both are done, I will attach them to the Earth.  I intend to make the sun with the same circular beading technique I have used on Earth and with the moon...but I will be using a mix of reds, oranges, yellows and whites and will attach loops representing solar flares.  Once the sun and moon are created, they will be attached to the earth and start the upward slope on the right hand side of the necklace. 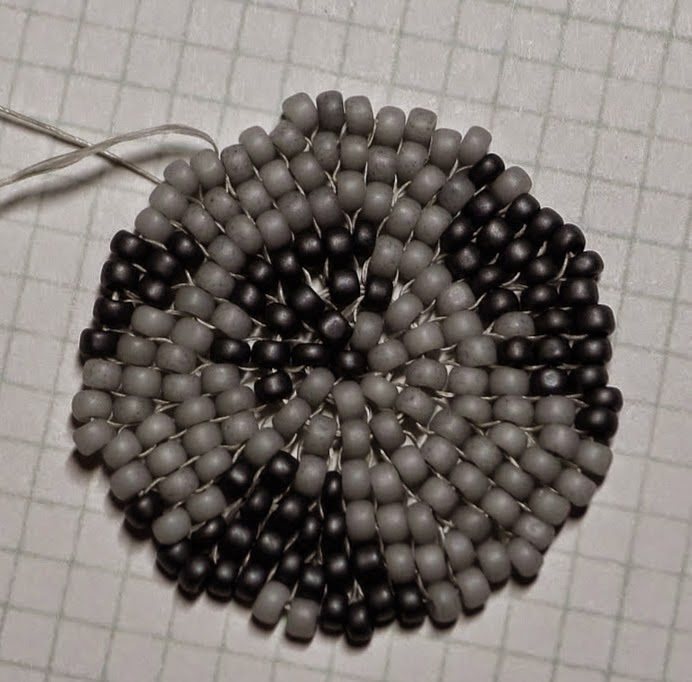 Last but not least we have the beginnings of the explosion of life on earth – the 5th day – which is when the beasts of the sea and the birds of the air were created!  (Genesis 1:20-23) Because my piece is so abstract, I didn’t want to bead an entire fish and bird.  I chose instead to bead elements of each – a fin and feathers.  I have finished both of the fins I will be incorporating however I have not begun my feathers.  Here is a picture of the fins! 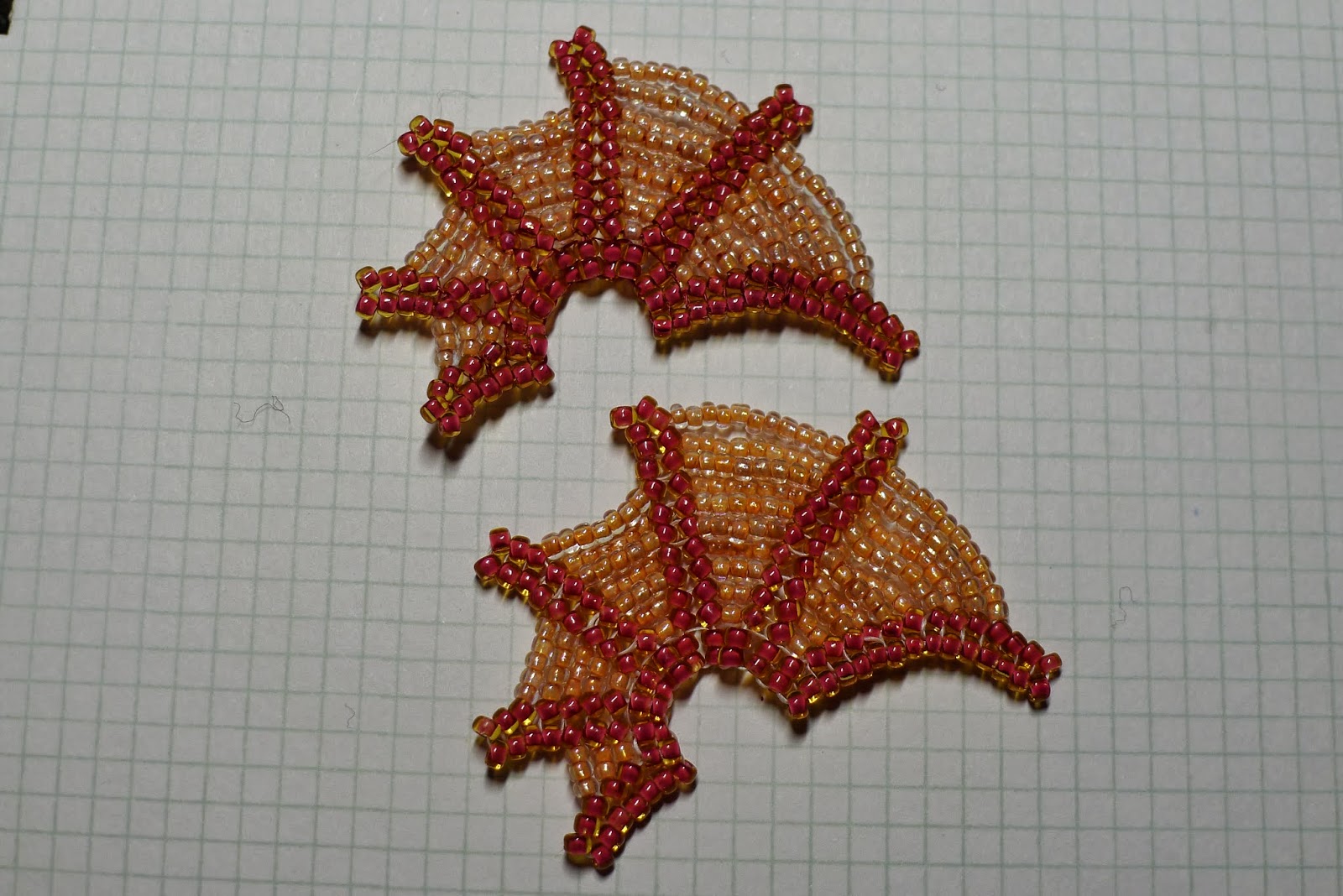 Once all my pieces are constructed I will begin the process of assembling.  Here is a pic with all of the pieces I have made thus far and how they will lay when I am putting them together. 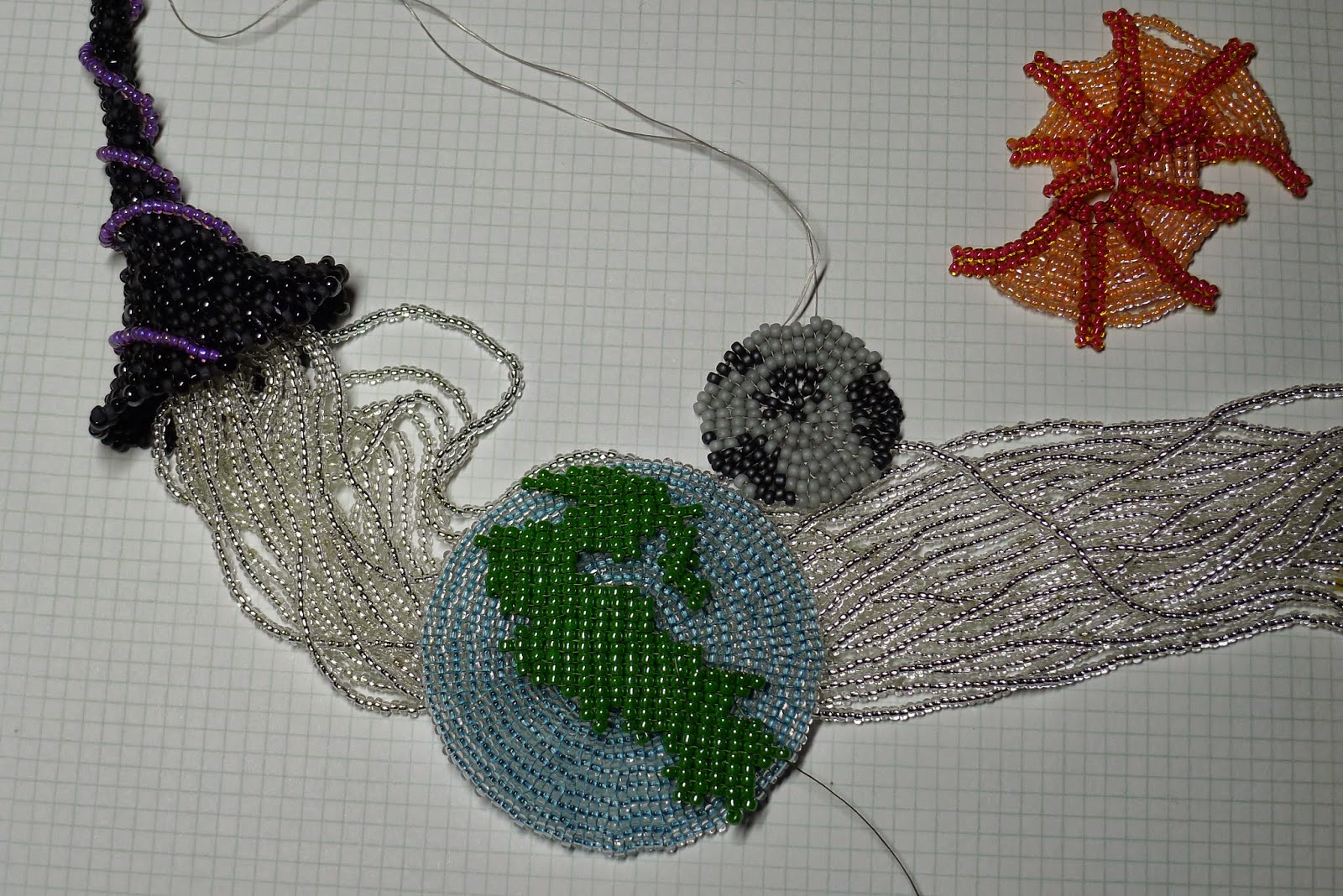 This process of exploration thru time in beadwork has really been challenging for me and I am so excited to finish this piece and post later.  I really hope that you enjoyed seeing my process and perspective...and don't forget to check out all the other participant's designs...everyone did such an amazing job!